Photos by Weng
.
Standing at the starting line on the cool Sunday morning, one can see the vast difference between previous years and this time around. The number of participants for full marathon has shrunk. It was expected as previously, familiar faces of runners can be seen everywhere; the hotel, the streets and food courts but now scarce. The unfavorable exchange rate has probably made many fellow Malaysian runners stayed away from this annual event. Nevertheless, the atmosphere was still great with music in the air and the announcer getting everybody into the mood.
. 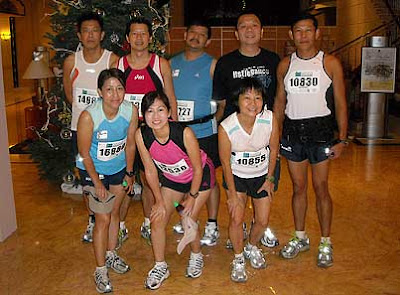 Back: ChinYH, Steven, Mike, Jason Lee, Weng
Front: Angie, Josie, YeoBL
As the gun goes off just before 5.30am, the song ‘C U When U Get There’ by Coolio was playing in the background. It’s a rap song with mixture of nice beat and violin. Yes, please wait for us when we cross the finishing line…..

Armed with packets of Power Gel to boost my energy, I quickly settled into a comfortable pace. As I approached the first kilometer, a few male runners ran off the route and to my surprise, lined up against a aluminum/zinc wall at a construction ground and proceed to do their ‘small business’ without hesitation. The rest of runners on the road go wild shouting and teasing them.
. 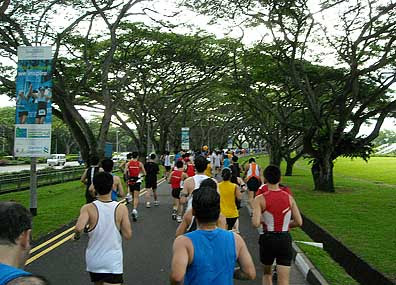 .The first water station came up after the 2km mark. Volunteers were seen busy scooping up the 100plus drink from big containers placed on the ground. Taking my first sip confirmed that it has been mixed with water. Well…on a positive note, this is definitely one way to ensure there’s enough supply for everyone including slow runners like me….:-)

As I ran into the East Coast Park, sirens from the official vehicles can be heard across the other side of the road escorting the leader, none other than Luke Kibet who went on to win the race in a record time of 2hrs13m. One can only watched with awe and admiration at how fast he can run. After running almost 30km, he was still speeding all the way while we huffed and puffed into the park.
. 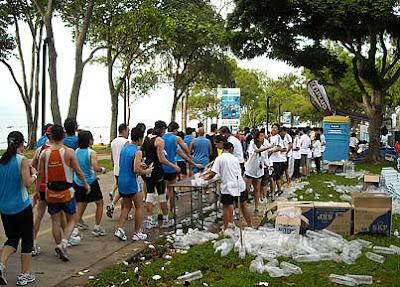 .If the number of participants for full marathon is less than previous years, so is the number of cheer teams and bands in the park. One plus point is the organizer made sure there were enough deep heating stations for runners to treat their tensed muscles. As usual, I will ask the volunteers to apply straight to my thighs and calves. I am glad that never once they refused my request…oh of course, I look for female volunteers only…:-)
. 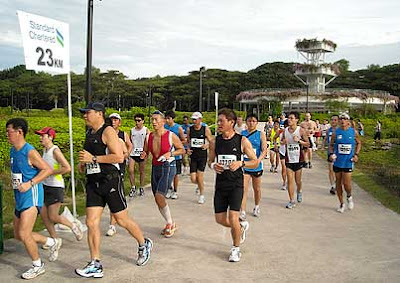 .The u-turn in the park signaled the half way point for full marathon runners. Like my first in 2007, I targeted a modest 4 hours to reach 30km and thereafter taking it slowly and easy in the last 12.195km. Well, another good reason for me wanting to finish the marathon at least in 6 hours is to ensure I have enough time to take a shower before checking out from the hotel as the hotel only allows up to one hour extension from the usual 12noon check-out time!!
. 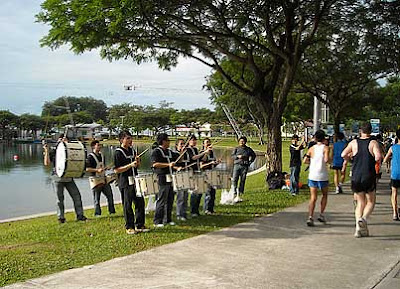 .
I managed to reach 30km in 4hrs03m. Thereafter, I began a series of walk and slow run. Not that I want to walk but my legs were beginning to weigh like tons. Every kilometer seems to be getting further and further and harder to reach. The slight overcast sky in the morning has since been replaced by hot sun. Fortunately, the heat was not as bad as in year 2007. Every marker reached seems hard to believe and served as an encouragement to spur me on. Approaching 39km mark, somebody shouted, “You are almost there. When you reach the Singapore Flyer, you’ll only have 2km to go.”
. 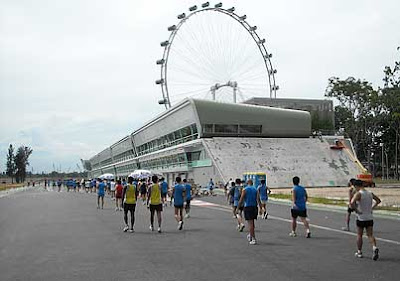 .Running pass the Singapore Flyer on to the F1 track bare off any trees was hard to bear in the heat. Even the exhibition of fancy sport cars and music at the pit stop area doesn’t seems to attract runners to have a second look as we run passed. I did not bother to take anymore power gel after 25km even though I still had 3 packets with me – I have consumed three!. Somehow I am not convinced anymore that it is able to revive my spent energy. Sorry…Power Bar :-p
. 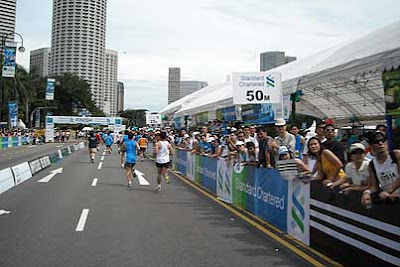 .
Familiar sight of the Esplanade building that has never been more welcoming than that particular moment. The blaring sound of music and the announcer from Padang can be heard louder and louder as I reached St.Andrew’s Road. People filled the sidewalks cheering their friends and runners. It was a thrilling experience as I approached the final bend and saw the marker 150m to go, then 100m, 50m. With a final push, I speed and crossed the finishing line with hands raised high up in triumphed and sheer happiness!! 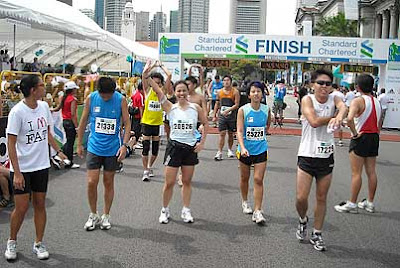 In jubilation for completing the full marathon - Evelyn Peh
.I was ill-prepared coming into this marathon. With only once a week run on Sundays one month before the actual day, it can hardly be called training at all. Thus, being able to finish in Sub-six hours without suffering any cramps is a bonus. At this point in time, I do not know whether I will return to SCSM next year due to the high cost but one thing for sure, running full marathon twice here leaves me nothing but good and sweet memories.
.And finally…of course, I still had ample time to enjoy a long shower before checked out from the hotel at 1pm….:-)
. 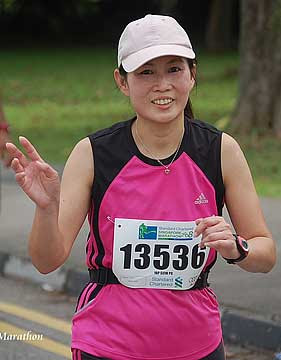 Josie (this photos is by courtesy of TeyET)
.

Posted by KC
.
Posted by KC & the Sunshine Runners at 6:06 PM
Email ThisBlogThis!Share to TwitterShare to FacebookShare to Pinterest
Labels: Run - SIM