Three groups of trail runners congregated for a social trail running at Puchong Hill on Saturday 24 Oct 2015. Led by Chow Kean Fatt and KH Tang as the Team Leads, the group took about 3 hours traversing the many trails for a distance of about 9km inclusive of waiting for one another, and spending time at the mini waterfall.

We have a running celebrity, Seow Kong, who joined us in the outing. He passionately did many of those international ultra-marathon trail running events. Together with him are a few of his Taiwanese friends who are excited to run in the tropical jungle.

Before heading to the "peak" of the Puchong trail, ChowKF led the fast-paced runners for another tough uphill run, while the not-so-fast trail runners would go direct to the "peak" and rendezvous there. He fondly called that hill the "Gasket Burning" hill – meaning that a lot of power is required to go up that hill and may cause the damage of the gasket of an engine if not well lubricated.

These days, we are not too overly concern with the poor quality of air, courtesy of our neighbouring country. In the canopy of the trees aid by the abundance of oxygen produced by the photosynthesis process, the air in the jungle is better. Besides, according to the official report, we are not going to stay indoor until March 2016 when the haze problem is completely over.

Overall, it was a fun and enjoyable outing that we were able to run with many of the trail runners friends together.

Do CLICK HERE to view 66 photos courtesy of yours truly (KC). 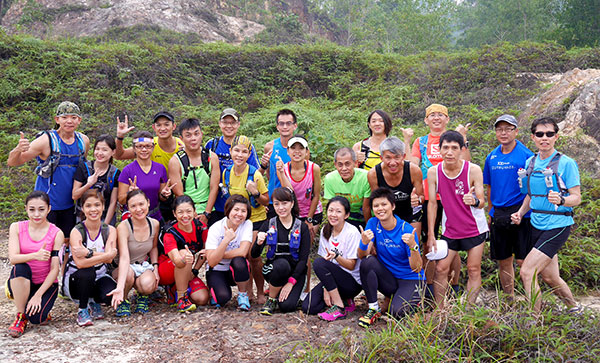 Group photo before the start of the trail running 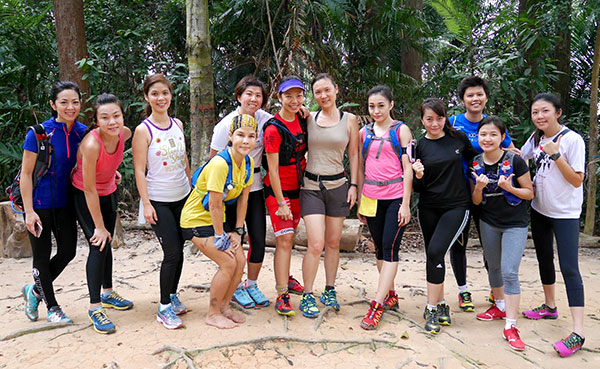 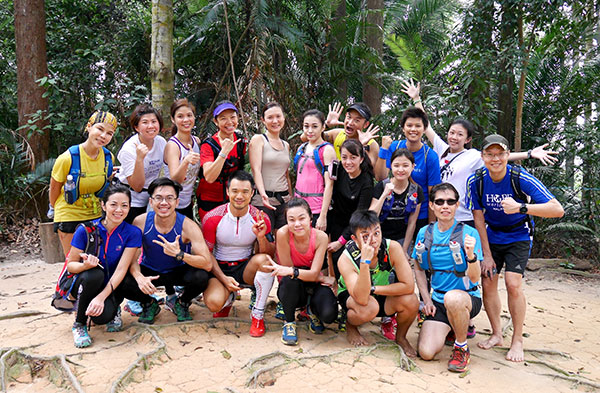 Group photo at the “peak” area of Puchong Hill 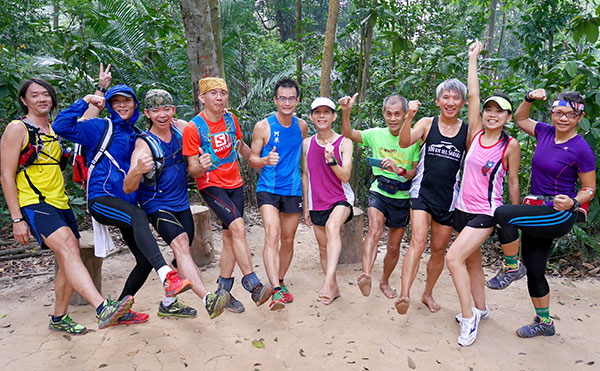 Lead by ChowKF (Left #4) and KH Tang (L1), the group emerged from the “Gasket Burning” trail 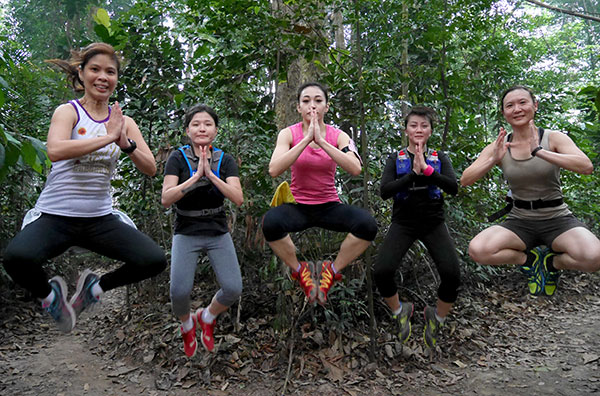 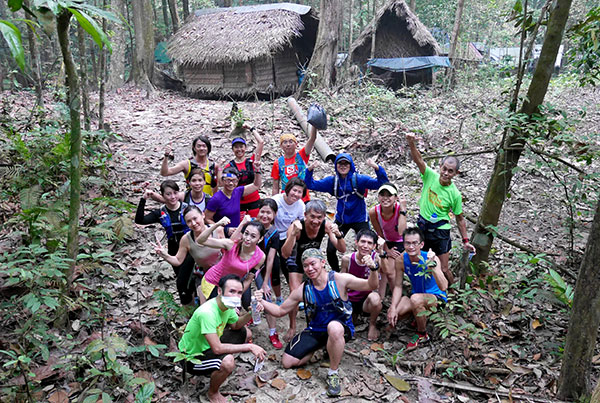 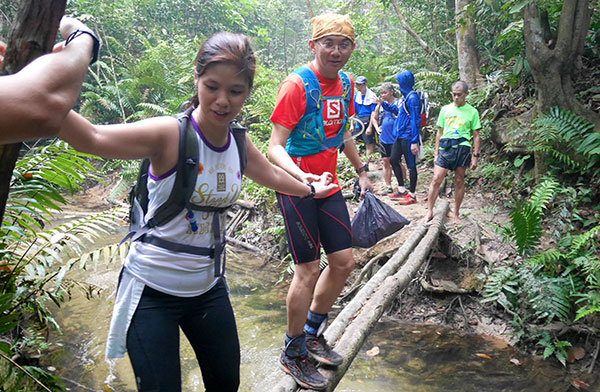 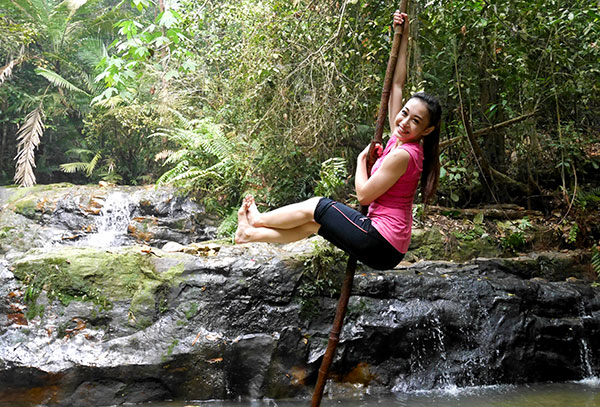 Tarzan and Jane – Yana is having an enjoyable time swinging from tree ... back to the same tree  :-) 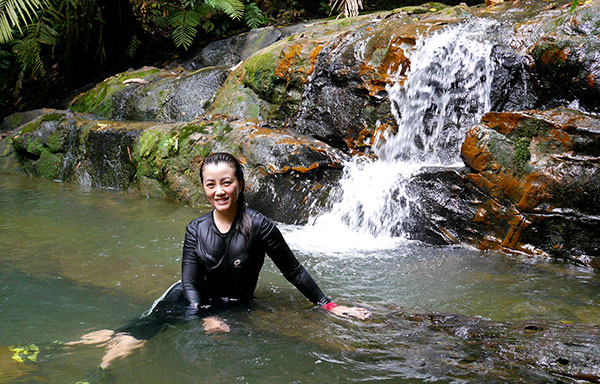 Lana having a dip into the refreshing cold water 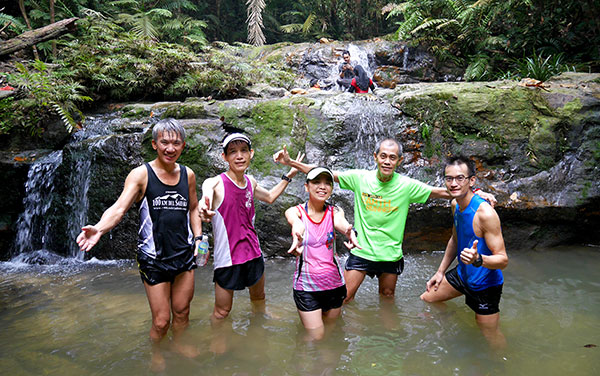 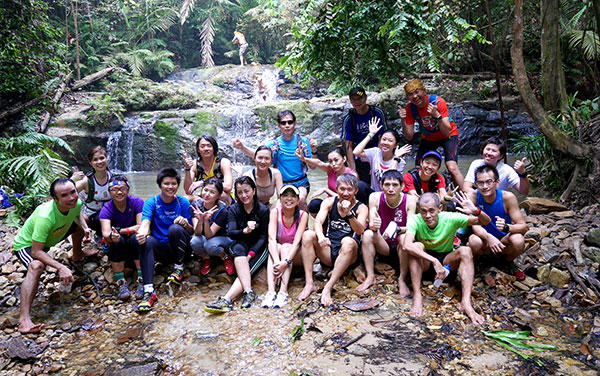 The group spend about 20 minutes at the mini waterfall 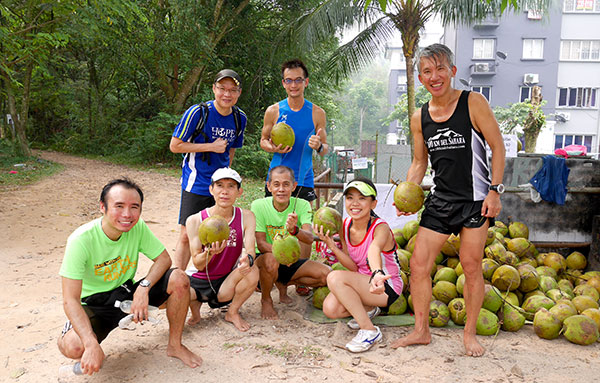 Seow Kong (right) and the Taiwanese friends, flank by Kah Wai (L1), Rich Cai (L3) and Michael Wong (Back #1). For a change, they are holding the heavy finisher medals also  :-) 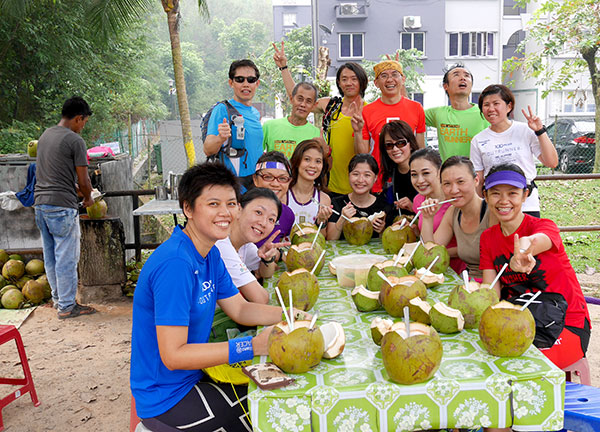 
Posted by KC Leong
Posted by KC & the Sunshine Runners at 10:25 AM No comments:
Email ThisBlogThis!Share to TwitterShare to FacebookShare to Pinterest
Labels: Trail Run - Puchong

The last time I ran with trail runner friends at KDCF was in Jan 2012 – a lapse of 3.5 years. I could only remember faintly certain part of the trails. In order to complete the mission, I have with me Khoo Ban Yu who has just bought a new Garmin GPS handheld device, and Chong YF who could also remember vaguely the various trails.

One of the reasons that we don't run here is due to the many stumps covered by leaves lining along the trail. One could easily kick the stumps, trip and fall. When the trails were first cleared, the small trees were cut down, leaving the bottom part of the trees protruding about few inches above the ground.

This morning, I was surprised to see that the trails were well maintained, so the stumps on the ground are all visible for avoidance of being tripped.

The next time that we run here, we shall extend the distance by exploring Unity trail.

I managed to connect from KDCF to Taman Rimba Riang via Unity and Harmony trails. Do CLICK HERE to download the trail map drawn by yours truly (June 2016).

Do CLICK HERE to view photos courtesy of yours truly, KC. 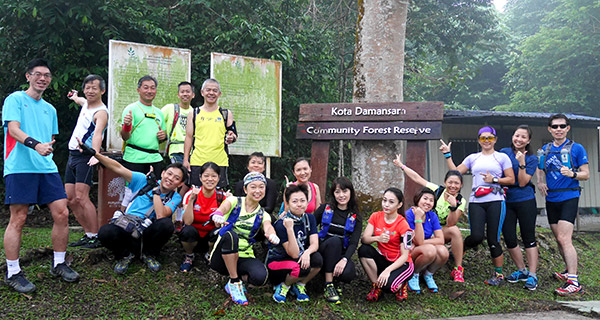 Group photo with the signage 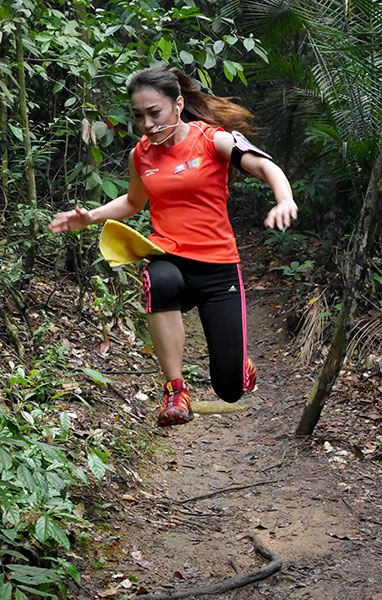 Yana with the high-flying running pose 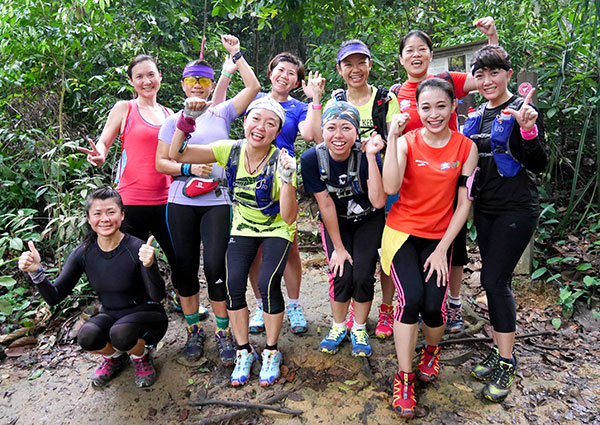 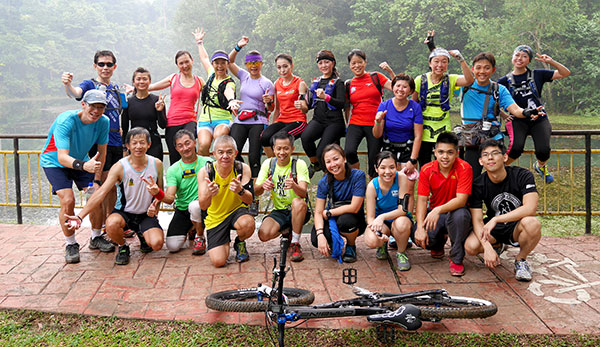 At the lakeside area 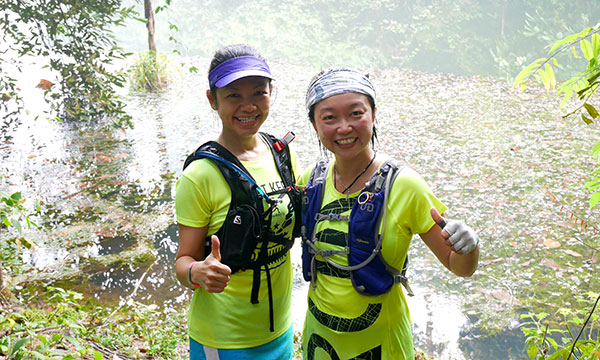 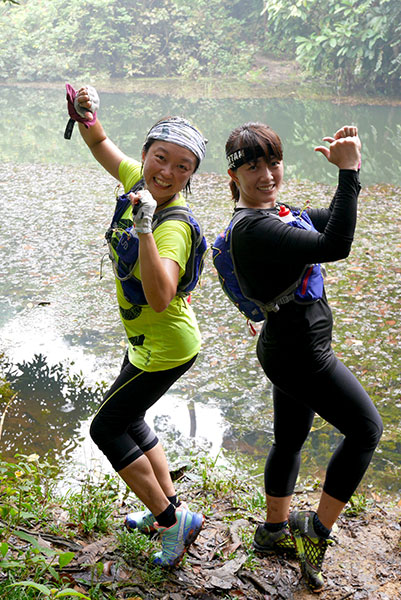 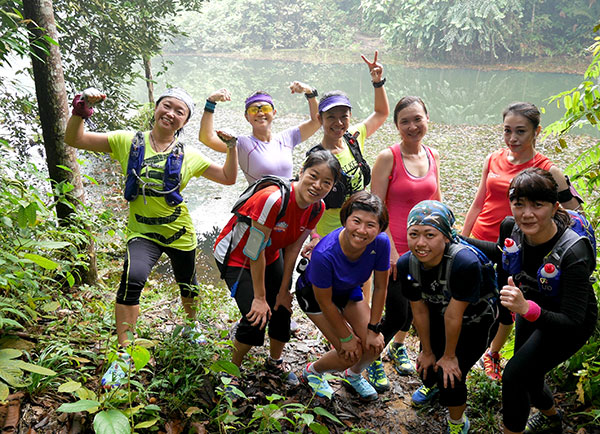 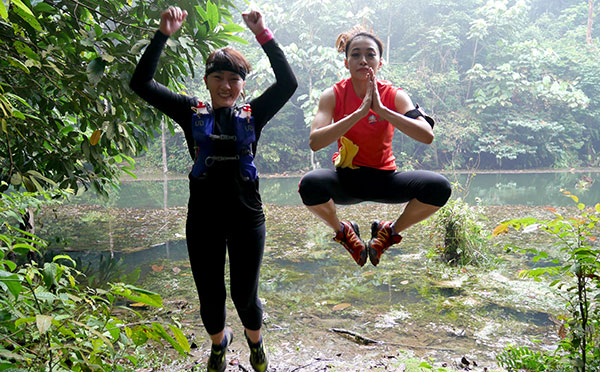 Demonstrating the art of vertical levitation – Lana and Yana :-) 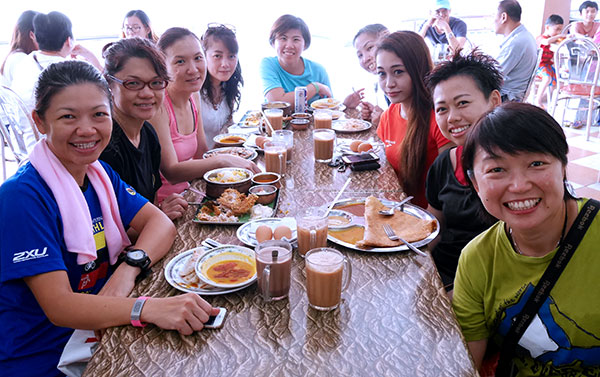 Adjourn to the nearby mamak coffee shop for refreshment